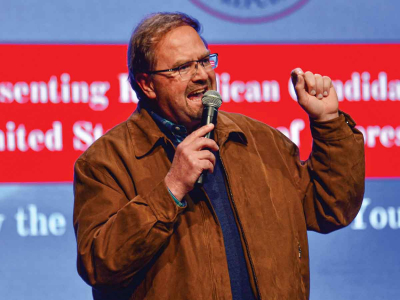 On August 24, Biden announced a three part plan providing targeted debt relief of up to $20,000 to people who earn less than $125,000 a year and have outstanding principal on student loans.

The next day the official Twitter account Republicans on the House Judiciary Committee said, “If you take out a loan, you pay it back. Period.”

All four — along with other Republicans who spoke out against Biden’s plan — were recipients of COVID-era Paycheck Protection Program loans that were later forgiven. Green took over $180,000, Kelly took just over $987,000, Mullin took $1.4 million and Buchanan took over $2.3 million.

C. Edwards Group, Inc. is the operating company for several McDonald’s restaurants in western North Carolina, including four in Hendersonville, one in Brevard and two in Canton. Secretary of State the records say Edwards is the chairman of C. Edwards Group, which said it has 261 employees.

Edwards’ loan and accrued interest was eventually forgiven, but when Edwards was asked about Biden’s plan, he wasn’t as enthusiastic about canceling student debt.

“This policy is unfair to the millions of Americans who have paid off their debt and to the taxpayers who will now pay the debts of those who have not,” Edwards told the Smoky Mountain News. “And that will make inflation worse. This needs to stop, and when I get to Congress, I will fight to restore our nation’s fiscal savvy.

Edwards went on to say that Biden and Democrats view taxpayers “solely as ATM machines designed to fund pet projects of the far left.” However, a bill directed by Edwards Last year would have changed The North Carolina tax code to give him and other PPP loan recipients an ATM withdrawal on their own — from the state treasury.

Initially, North Carolina did not tax PPP loan proceeds as income, nor did it allow spent PPP funds as a tax deduction for business expenses.

When the General Assembly adopted the Finance law 2021 , the non-taxable income provision remained intact; however, individuals and corporations were allowed to deduct funds spent from canceled loans as business expenses.

Proponents of the change say it simply forces the state to comply with the federal tax code.

Like House Speaker Tim Moore (R-Cleveland), Edwards brushed aside ethical concerns, saying WBT’s Nick Ochsner that he “was not – and has not been – acting on my behalf” and that he “came here to Raleigh to represent corporate interests”.

Last week, the North Carolina Department of Revenue announced that while the federal government does not consider Biden’s student loan forgiveness “income” for tax purposes, the North Carolina General Assembly did not act to comply with the Internal Revenue Code on this article.

That means North Carolina residents who receive student loan forgiveness under Biden’s plan will take a state tax hit for $10,000 to $20,000 of taxable income.

Edwards currently has two opponents in the race for the western North Carolina congressional seat, once held by Mark Meadows and currently held by Rep. Madison Cawthorn (R-Henderson).

Libertarian David Coatney runs a small business focused on online marketing . Although Coatney did not provide details about his own level of education or how he paid for it – like Edwards, who did not respond to questions about his educational background or his possible use of student loans. – Coatney gave his opinion on how student loan forgiveness and PPP forgiveness are two very different things.

“I don’t think student loans should be compared to PPP loans. For starters, higher education is a choice. The government didn’t force me to go to college and get into debt. They have, however, forced businesses out of business and prevented many small business owners from earning a living,” Coatney said. “The PPP loans were meant to make up for the fact that the government had told many small business owners they weren’t allowed to operate. This is an important distinction.

Maybe that’s the case, or maybe because two companies run by Coatney in two different states both benefited from PPP loans that ended up being forgiven.

Sleek Web Marketing LLC of Springdale, Arkansas, which lists Coatney as the founder , received $19,361 on April 14, 2021 and reported three jobs. The company has since been dissolved.

Fletcher’s Sleek Web Marketing LLC, which is still an active company, reported two jobs and received $23,232 on January 31, 2021. This loan has also been cancelled. Coatney is listed in the North Carolina Secretary of State Archives as President of the society.

According to campaign manager Luke Tonat, Beach-Ferrara worked as a janitor in a dining hall for most of his undergraduate career, but still left school with nearly $70,000 in student debt.

Beach-Ferrara’s debt was canceled via the Cancellation of civil service loans program, which cancels student debt for those who become employed by a federal, state, or local government or nonprofit and have made 120 qualifying payments on their debt.

“I support the provision of immediate relief – including the cancellation of student loans for middle-class families. People who have obtained degrees to become teachers and nurses should not be held back by crippling debt,” Beach-Ferrara told the Smoky Mountian News. ‘In contrast, my multi-millionaire, self-funded adversary Chuck Edwards had his $1.1 million PPP loan forgiven while criticizing student loan relief for working families. We have very different priorities – and it’s clear why he continues to dodge debates and forums to avoid talking about those clear distinctions.

The Risk of Zero-Rate Lending as the Fed Talks Recession