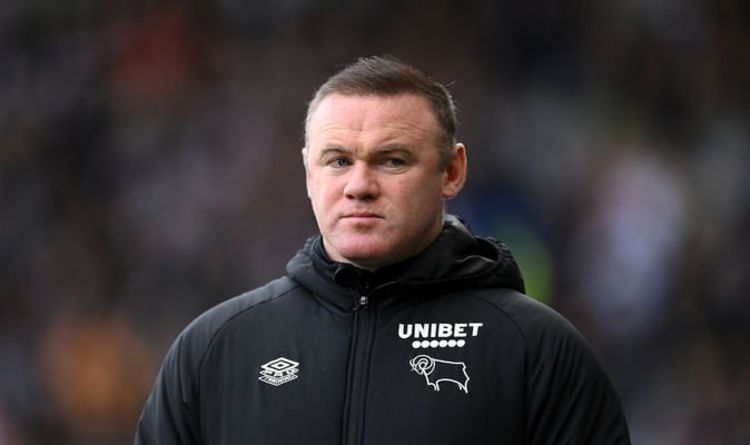 Chelsea and Crystal Palace have been accused of ‘taking advantage’ of Derby County’s financial situation by Rams boss Wayne Rooney. Both Premier League clubs signed youngsters from the Championship side during the January transfer window.

Derby’s future remains uncertain, with club administrators yet to provide a preferred bidder.

They must also prove how the club will be funded for the rest of the 2021-22 campaign by the start of March.

The January transfer window was a chance for the directors to claw back some much-needed cash.

Chelsea have signed 18-year-old left-back Dylan Williams, while highly-rated striker Luke Plange has joined Palace in a deal worth £1million.

Plange was allowed to join Derby until the end of the season. Rooney’s side are under a transfer embargo but the EFL have cleared the deal as long as the 19-year-old’s salary remains the same.

JUST IN: four-word message from Mesut Ozil to Pierre-Emerick Aubameyang after his release

Midfielder Graeme Shinnie joined Wigan while experienced defender Phil Jagielka and striker Sam Baldock were released as Derby could not retain them beyond their short-term contracts.

“We are in a difficult position and I think other clubs have taken advantage of this,” the Manchester United icon told BBC Radio Derby.

“Whether it was Wigan with Graeme Shinnie, Crystal Palace with Luke Plange, they saw an opportunity.

Want the latest Premier League news as we publish it on Express Sport? Join our brand new Facebook group by clicking here

Palace chairman Steve Parish was keen for Derby to receive a fair deal.

“Less than 12 years ago, our club was in a similar situation – as a result, we were determined to ensure that both clubs benefit from this agreement,” Parish said.

“Therefore, Luke will return on loan for the remainder of the season and help Derby in their important battles on and off the pitch.

“I look forward to seeing Luke compete in Palace colors soon, and until then enjoying the performances he continues to give for Derby.”